Author of John W. Thompson: Psychiatrist in the Shadow of the Holocaust 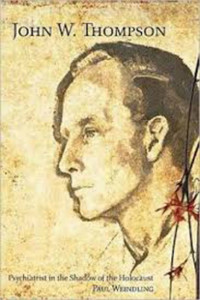 John W. Thompson’s biographer is also a bioethicist and world expert on the Nazi doctors. Dr. Paul J. Weindling is Wellcome Trust Research Professor in the History of Medicine at Oxford Brookes University. Like Thompson, he has studied the complex network of Nazi medical atrocities from first source documents. In the early 1990s, tissue samples and bones from Nazi victims were still being used for research and teaching in Germany, and a movement developed to quickly remove the remains from universities and hospitals and bury them. Was it more respectful to bury the remains in anonymous mass graves or to establish the identity of the victims and how and where they died, so that they could be buried as identified individuals. Dr. Weindling has written about this controversy in an article entitled “‘Cleansing’ anatomical collections: The politics of removing specimens from German anatomical and medical collections 1988-92” (Annals of Anatomy, vol. 194, 2012, pp. 237-242). He has spent several years identifying the victims of Nazi medical experiments through extensive research in German archives and he has succeeded to a remarkable degree. Dr. Weindling views this work as completing what John W. Thompson began in 1945.

Paul Weindling at Swarthmore College, November, 2014, where he gave a lecture on Science and Compassion: John W. Thompson’s Trajectory from Swarthmore to the Nuremberg Trials. Thompson was a professor of Physiology and Anatomy at Swarthmore from 1929 to 1932.